Petty Theft with a Prior Penal Code 666 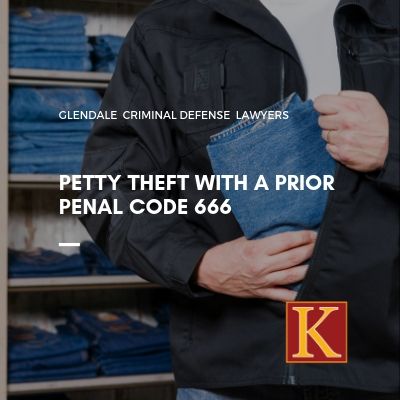 Elements of Penal Code 666 Petty Theft with a Prior

Prosecution must establish the following elements for convicting the defendant of the petty theft with a prior under Penal Code 666:

To get conviction of petty theft with a prior the defendant must also have a conviction for any of the below mentioned offenses, additionally to a theft crime conviction.

Prior to proposition 47, three prior convictions for different theft crimes could lead to a felony sentence of sixteen months to three years for a conviction on a new charge.

But, proposition 47 has changed the law so that most of the cases with three prior theft convictions will remain misdemeanors. Exceptions are the following:

Intent is one of the key elements that must be proved for convicting defendant of a theft crime.  In case the defendant didn’t not intent to steal the property he is not guilty of petty theft.

In case the owner of the property gave the defendant a permission to take the property, he can’t be found guilty of petty theft.

Penalties for a California Penal Code Section 666 conviction include

In California law petty theft with a prior conviction is a wobbler and can be charged as either a misdemeanor or a felony, depending on the case facts and the defendant’s criminal history.

Our Glendale petty theft lawyers can help you defend your penal code 666 charges. Call our office at (310) 943-1171 or contact us via email at info@kaass.com to schedule a free consultation with a Glendale criminal defense attorney. Our lawyers in Glendale, Los Angeles, CA, are highly dedicated to serving to needs of our clients.