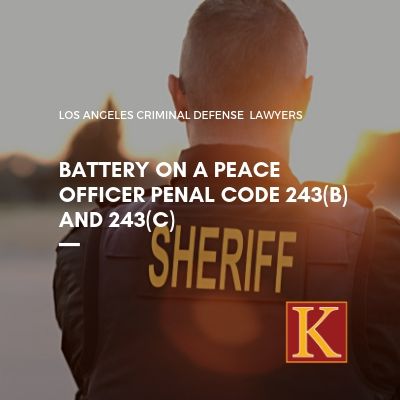 California Penal Code Sections 243(b) and 243(c) makes it is illegal to commit a battery on a peace officer. Person can be found guilty of PC 243(b) or (c) if he knowingly used unlawful force against a peace officer while he was performing his duties.

Elements of Penal Code 243(b) Battery on a Peace Officer

Prosecutor must establish the following elements to prove that the defendant is guilty of battery on a police officer.

For Purposes of The Penal Code A Peace Officer Includes

Penal Code gives a broad definition to a “peace officer”, which includes the following:

Penal Code Section 243(b) and (c) is only applicable when the peace officer whom the defendant battered was engaged in the performance of his duties.

Even the slightest touching, if it is done in an objectively rude or violent manner constitutes offensive touching even if it didn’t cause harm, pain, or any kind of injury. The touching doesn’t need to be direct.

In case the defendant reasonably believed that he or another person was in imminent danger of great bodily injury or harm and he reasonably used force necessary to deflect that harm, then he can assert self-defense.

For being convicted of a 243(b) or (c) defendant must have intentionally touched the peace officer. In case he didn’t act willfully he cannot be found guilty of battery on a peace officer.

In case the peace officer whom the defendant battered was not engaged in the performance of his duties, then he cannot be found guilty of this crime.  Even if the victim announced that he was a peace officer and was wearing a police uniform he cannot be deemed performing his duties in case he unlawfully detained or arrested the defendant, violated defendant’s fourth amendment rights or committed police brutality. This means that officer was not engaged in a legal performance of his duties.

Penalties for violating California PC 243(b) and 243(c) Sections

In California a basic battery on a peace officer is a misdemeanor with the following penalties:

According to California PC Section 243(c), a battery on a peace officer that caused an injury is a wobbler and can be charged as either a misdemeanor or a felony, depending on the circumstances of the case and the defendant’s criminal history. For purposes of California PC Section 243(c) the injury is considered the one that requires medical attention.

Penalties for a misdemeanor conviction are the following:

Penalties for a felony conviction are the following: