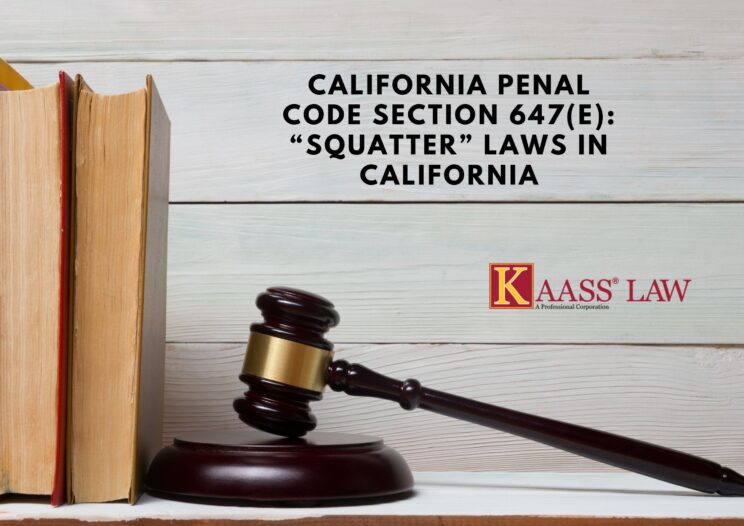 California Penal Code section 647(e) criminalizes anyone, “Who lodges in any building, structure, vehicle, or place, whether public or private, without the permission of the owner or person entitled to the possession or in control of it.”

What Is “Squatting” and What Makes It a Criminal Offense in California?

“Squatting” refers to the act of illegally taking shelter on private or public property without any permission. It is also known as, “illegal lodging.” The crime itself requires these 2 elements to be satisfied:

Illegally lodging in the eyes of the law can be done in a few ways, all of which are suggestive that you have stayed or intend to stay on a property that is not yours for an extended period of time. They include:

It is also required that a squatter does so without consent by a property owner in order to be in violation of the law. This can be directly expressed by the owner (i.e. they tell squatters that it’s fine for them to stay on their property) but it can also be implied. Implied consent encompasses actions or inaction taken by the property owner that implies permission for squatters to lodge there. Some examples include:

What Are the Punishments for Squatting?

Squatting is considered a misdemeanor in California. The punishments may include the following:]

Often, being charged with squatting will also constitute a violation of PC 602, trespassing. Since squatting is the crime of staying or planning to stay on a property that isn’t your own, usually the people who commit this crime have entered the premises illegally. Trespassing is a misdemeanor offense that carries the same punishments as squatting.

How Can I Defend Myself if I Am Charged With Illegally Squatting?

There are several legitimate defenses you can use if you are charged with criminally squatting. Some of these include:

Illegal lodging requires that you do something to indicate that you plan to stay on someone else’s property for an extended period of time. Perhaps this was the case, but you didn’t actually plan on staying long.

EX: A man gets off his flight at an airport and waits at a nearby parking lot at night for his taxi to arrive. He is carrying a large number of belongings in his luggage, and he is somewhat disheveled from being on a long flight. A property owner in the parking lot sees the suspicious-looking man with several belongings sitting in his parking lot and calls the police, who arrest him for squatting.

While carrying belongings is a sign of a squatter, the man did so for reasons other than trying to lodge in the parking lot, so he would not be in violation of the law.

It is also possible that you did not do anything at all to indicate your intention to stay on the property for an extended period. Homeless individuals who are breaking the law may be charged with squatting just due to their appearance, which is not an adequate basis for the crime. If you didn’t do something specific that indicates your intent to illegally lodge, you cannot be considered a squatter.