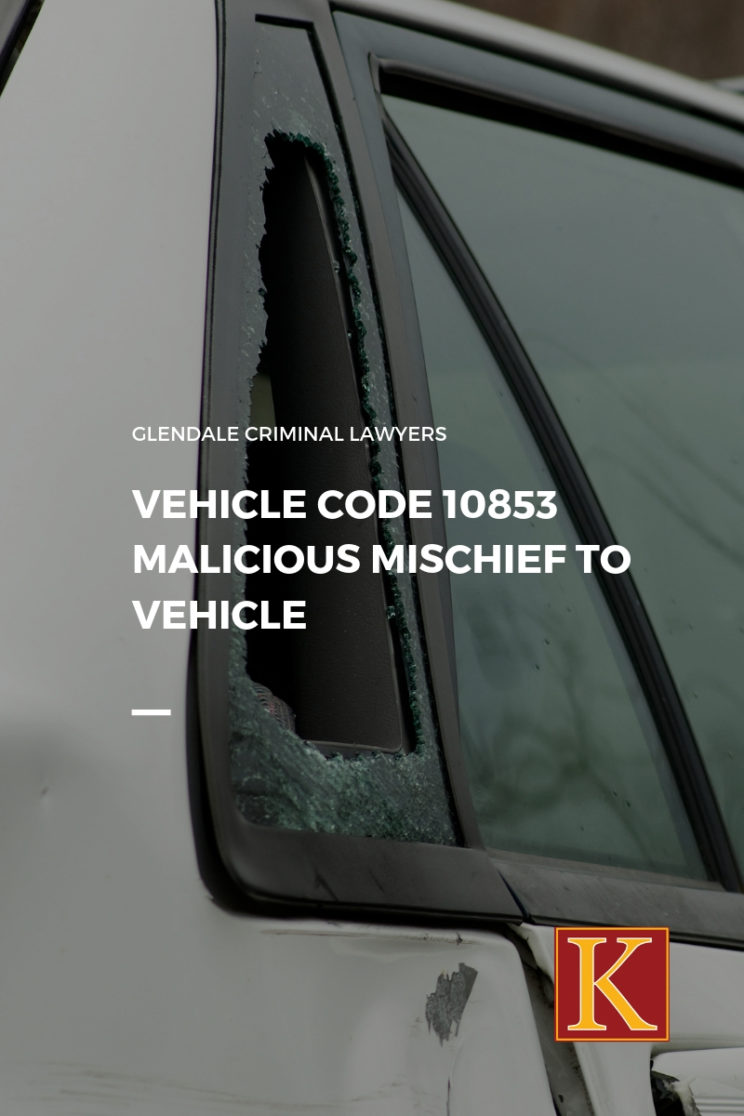 According to California Vehicle Code Section 10853 it is unlawful for any person to intentionally deface damage or destroy the personal property of another. The law applies both to vehicles and items attached to vehicles, as mirrors, hood ornaments and license plates.

For a defendant to be convicted of Vehicle Code 10853 malicious mischief to a vehicle the prosecutor must prove the following elements beyond a reasonable doubt:

Malicious mischief is type of a non-violent crime, which doesn’t involve injury to a victim or use of force and fear; instead it involves some type of property damage or economic loss to a victim. Malicious mischief of a vehicle occurs when someone damages another person’s property regardless the amount of damage. The value of the damage can be significant or minor, but the key issue in the crime is the damaging of the property. Malicious mischief does not involve taking a vehicle, but only defacing, destroying or otherwise damaging it without the owner’s consent.

Common defenses to California Vehicle Code 10853 Malicious Mischief to a Vehicle include the following:

Defendant didn’t have an intent to deface, damage or destroy

Person must have a clear intent to damage, deface or destroy another person’s vehicle. In case he did so accidently and without specific intent he can’t be criminally liable under California Vehicle Code Section 10853.

Wrong person has been arrested

People usually commit malicious mischief to a vehicle at night and do it very quickly. So it becomes really hard for eyewitnesses to recognize the person who has committed the crime and this can lead to false arrests.

According to Vehicle Code Section 10853 malicious mischief to a vehicle is a misdemeanor level offense. The penalties for this crime are the following:

Consequences for a Vehicle Code 10853 Conviction

In addition to all penalties the conviction can lead to significant consequences for the defendant. The conviction is visible to landlords, employers and anyone else who conduct a criminal background searches.

The following crimes are related to malicious mischief to a vehicle.