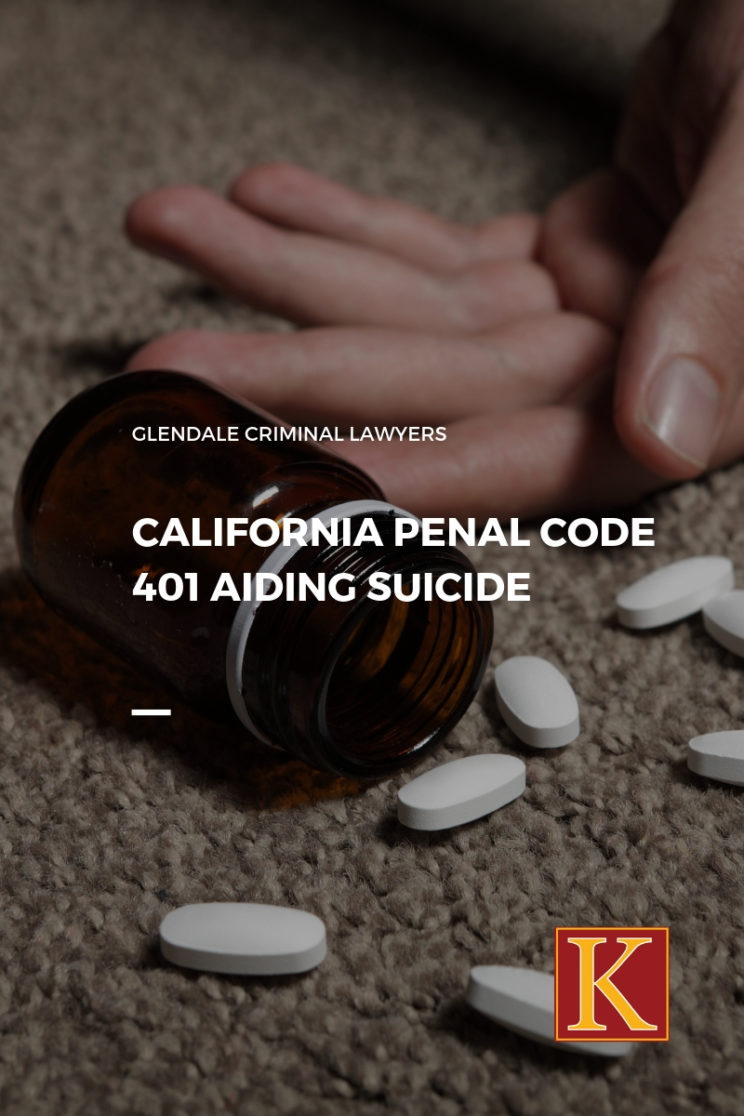 According to California Penal Code Section 401 it is prohibited to intentionally aid, advice, or encourage another person to commit suicide.

Prosecutor must establish the following elements to prove that a defendant is guilty of advising or encouraging a suicide,

What Does “Aiding, Advising or Encouraging Suicide” Mean?

“Aiding, advising or encouraging a suicide” means the following:

Even if a person survived the suicide attempt you can still be charged of assisting in suicide as a California attempt crime.

Difference Between Murder and Assisting a Suicide

If the defendant helps another person to kill himself he will be guilty under Penal Code Section 401. In case a person asked the defendant to kill him and the defendant carry out that act, then his action will be considered murder, voluntary manslaughter, or attempted murder.

California’s End of Life Option Act allows a person who is diagnosed with a terminal disease to ask for an aid-in-dying drug from his physician. For receiving an approval the physician must submit detailed information to the California Department of Public Health.

What Conditions Must Be Met Under California’s End of Life Option Act?

The patient must meet the following conditions for getting help to commit a suicide under California’s End of Life Option Act:

If the all above mentioned requirement are met the physicians cannot be prosecuted under California Penal Code Section 401 for assisting a terminally ill patient’s suicide.

In case the defendant unintentionally aided or encouraged a person to commit suicide without intent, he can’t be found guilty of this crime.

The person didn’t have intent to commit a suicide

Maybe the person who attempted or committed suicide didn’t have actual intent to kill himself. The attempt or the death may have been an accident.

Under California law aiding, advising or encouraging a suicide is considered a felony. The punishment depends on whether the person survived the suicide or not. Defendant can receive lighter punishment in case the person has survived.

What are the Penalties for Penal Code 401?

The possible penalties under Penal Code 401 Aiding, Advising or Encouraging Suicide” include: