How Is Liability Established In An Underride Collision? 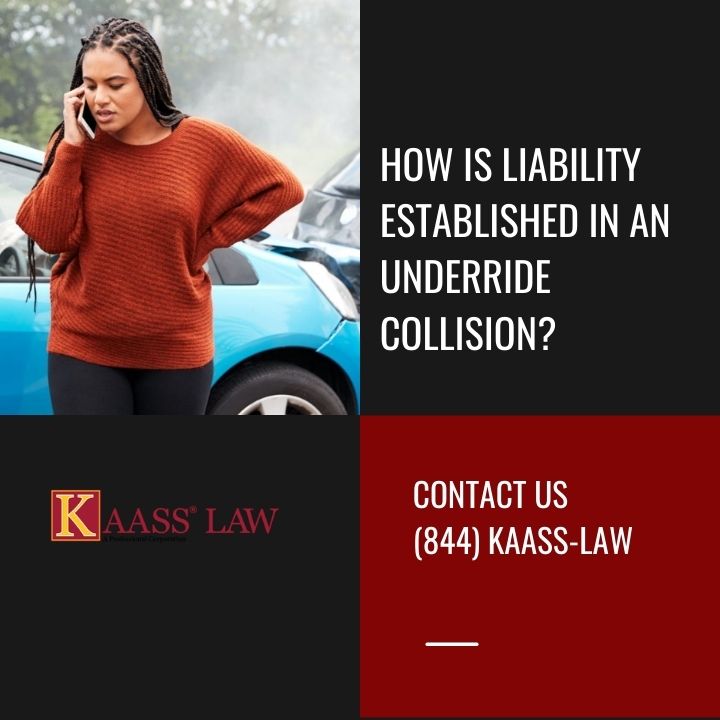 What Is an Underride Collision?

One of several risks of tractor-trailers is that they are significantly higher off the ground than passenger cars, and a smaller vehicle can wind up sliding under the trailer in the event of a collision. This is known as an underride collision, and if you’ve ever been in one, you know how dangerous they can be.

When the front of one vehicle collides with the rear of another, it is possible for the first car to go underneath or above the second car. This often results in severe injuries because there are not any parts on top to absorb energy from an impact like seat belts or airbags.

Underride has the potential to crush entire cars, leaving victims with severe and disfiguring injuries. Unfortunately, far too many of these collisions result in death. If you’ve been seriously injured or lost a loved one, you’re in for a long and difficult journey.

How Is Liability Established During an Underride Collision?

Naturally, when a truck is rear-ended, the trucking business will argue that the back vehicle’s driver is to blame. After all, truckers are no more capable of regulating the vehicle in front of them than any other driver.

The truck driver and the trucking firm, on the other hand, are responsible for ensuring that their vehicle does not pose a hazard to other cars, including those approaching from behind. The following are some of the reasons a truck driver could be at fault for an underride collision:

A third party, such as another motorist, may be held liable for an underride collision. For example, say an automobile cuts in front of the truck, prompting the driver to slam on the brakes, producing a chain reaction in which a vehicle coming behind rear-ends the trailer – especially if the rear driver couldn’t see the hazard in front since the truck itself was blocking the view.

Most significantly, even if the wounded motorist was at fault for the accident, trucking companies and vehicle manufacturers have an obligation to guarantee that the trailer is secured from underride. Underride protections are now standard on most tractor-trailers, although they frequently fail, especially if they are not properly maintained or if they are struck from an angle.

Depending on the specifics of the case, an injured person may be entitled to file a lawsuit against the manufacturer for product responsibility or against the trucking business for negligent maintenance.

Get Legal Assistance with an Underride Collision

Truck collisions are typically high-stakes situations, but they’re even more so when underride is involved. Multiple insurance firms are usually always involved: the cab and trailer each have their own policies, as do the manufacturer and any other parties involved (such as other involved vehicles).

The idea is to take immediate action before legal deadlines pass and crucial evidence vanishes or is lost. We can begin protecting your rights and advocating for your needs as soon as you speak with an attorney. There will be more obstacles in your way, but you won’t have to tackle them alone. To talk with an expert underride accident attorney about your case, contact us immediately.