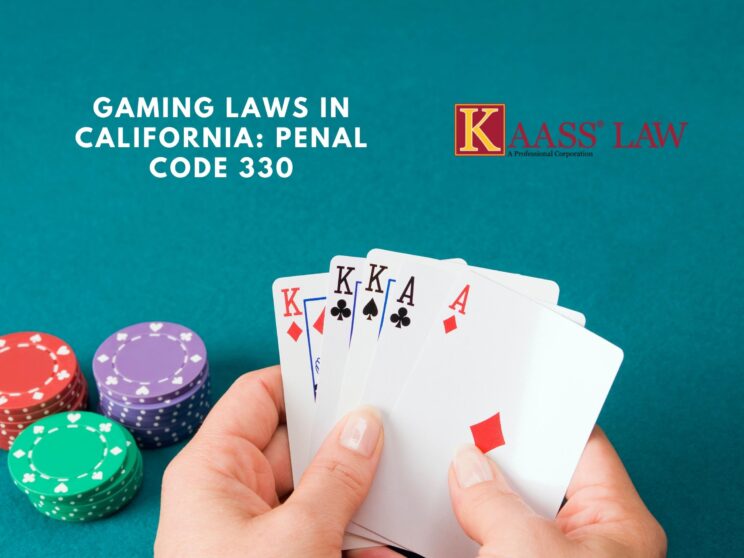 Penal Code section 330 outlines the crime of “gaming,” or illegal gambling. It states that, “Every person who deals, plays, or carries on…any banking or percentage game played with cards, dice, or any device, for money, and every person who plays or bets at or against any of those prohibited games, is guilty of a misdemeanor.”

What Is Gaming or Illegal Gambling?

Gaming refers to the act of gambling illegally. It is a crime to participate in a game that involves gambling or to run a gambling operation in the state of California. For gambling to constitute a crime, you must have illegally participated in some way, and the game itself must have violated the law.

You do not necessarily have to play in the illegal game in order to be charged with a PC 330 violation. The law specifies that it is illegal to deal, play, run, or oversee a gambling operation. This means that participating in gaming is not only illegal but if you conduct an illegal gambling operation on your property and collect some of the profit, you are guilty of a gaming crime.

The other requirement is that the game in question must be a “prohibited game” under California law. This means that the game involves a bank, house, or dealer that collects money from losers and gives it to the winners and/or itself. There are 2 main categories this creates: “banking” and “percentage” games. Banking games involve a 3rd party “bank” that distributes money from the loser to the winners. A percentage game means that the bank collects a percentage of the winnings or the total amount of bets.

What Are the Punishments for Violating PC 330?

Gaming is considered a misdemeanor crime in the state of California. The punishments for gaming may include up to 6 months in a county jail or a fine ranging from $100 to $1,000. Given that it is only a misdemeanor offense, a judge may choose to waive jail time and opt for probation instead.

How Can I Defend Myself If I Am Accused of Illegal Gambling?

There are quite a few legitimate defenses if you are accused of violating PC 330. Some of these are:

If you can prove that you did not participate in the game in question in a way that constitutes illegal activity, then you will successfully defend yourself against this charge. For example, say you own a club and some patrons start independently playing a game of poker. Even though it happened in your establishment, you did not collect any winnings from anyone nor permit the game to be played. This would be a legitimate defense against a gaming violation.

You can also prove that the game was not prohibited, meaning that it was not a banking or percentage game. You could show that the game didn’t involve money at all, or if it did, there was no house that collected a part of the earnings.

Lastly, there are a couple of exceptions to California gaming laws, most notably charitable games. Penal code section 326.5 specifies that bingo games held by certain charitable organizations are legal.