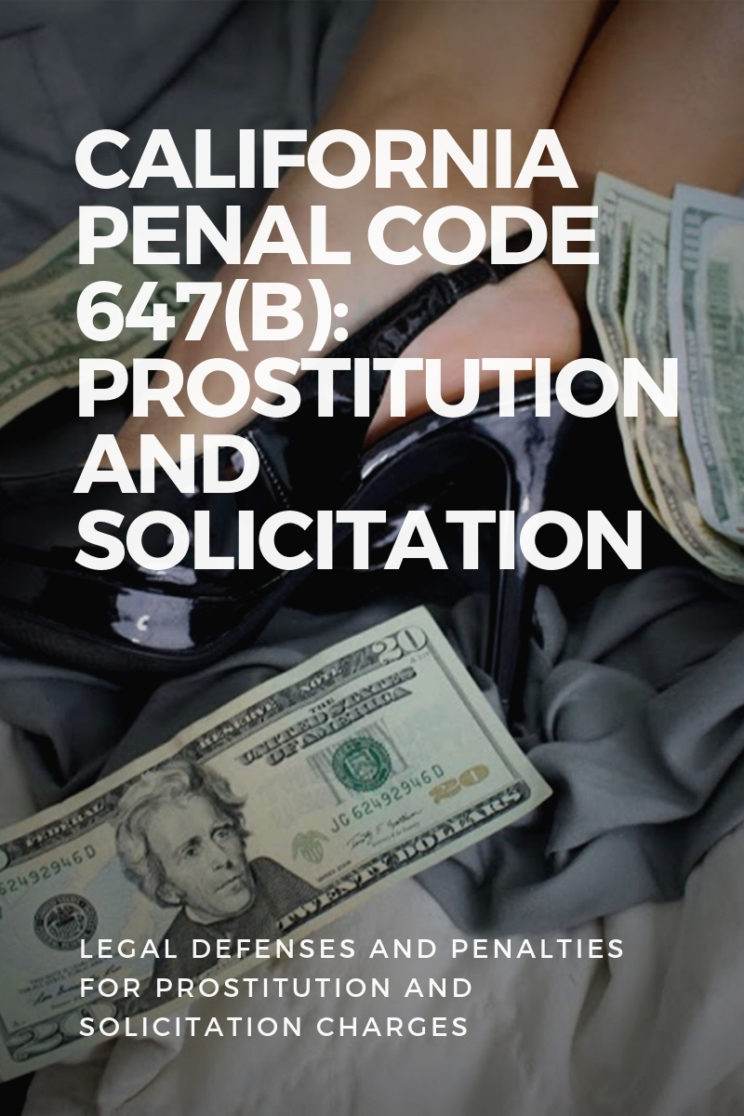 California’s Penal Code 647(b) defines prostitution as: engaging in a sexual act in exchange for money or other consideration, and makes it a misdemeanor for anyone 18 or older to:

It is important to mention that all people involved in facilitating the crime can be arrested and face prostitution charges. This includes the supposed prostitute, customer, and any other person that knowingly facilitates the encounter.

Some prostitutes also have middlemen, known generally as “pimps.” Pimps are more likely to be arrested for violating:

Engaging in an Act of Prostitution Means

Agreeing to Engage in an Act of Prostitution Means

Entrapment is when a government agency originates the idea of the illegal act, persuades a person to commit a crime and then allows a crime to happen. A person is not considered guilty of a crime if he was coerced or harassed to commit a crime that he was not predisposed to commit. In California’s law system entrapment is considered an affirmative defense, so the defendant has the burden of proving in case he or she was entrapped.

Lack of Evidence is a common defense under California Penal Code 647(b). In many cases prosecution lacks substantial evidence to prove that the defendant committed a crime punishable by conviction.

Misunderstanding: While the defendant may have performed sexual activity but did not have the specific intent to    engage in prostitution, he or she cannot be convicted under section 647.

Penalties for Prostitution or Solicitation in California Penal Code 647(b)

Penalties for First Offense Conviction for Prostitution Can Include:

Usually the court places a defendant on a period of probation and orders to perform community service.  Moreover, in all prostitution cases, the court orders the defendant to obtain an HIV test.

For second offense a court may sentence mandatory minimum a minimum of 45 days in county jail, and a minimum of 90 days for third or subsequent offense:

Additional penalty if committed in a car

If the offense was committed while using an automobile and within 1,000 feet of a residence, the defendant can face additional penalty:

There are a few legal defenses to penal code section 273.5 and are as follows:

Get Help Defending California Penal Code Section 273.5 Corporal Injury on a Spouse and Restraining Order from an Experienced Lawyer

Hire the most dedicated Glendale criminal defense lawyer to the legal services you require! Our attorneys at KAASS LAW are highly dedicated to help our clients in every way possible. You can rely on our experienced lawyers in Glendale, Los Angeles, California, to carefully analyze the facts of your case to prove the facts necessary. We back all of our clients and we invite you to give us a toll free call at (310) 943-1171 to speak to our experienced Glendale domestic violence attorney today. Get in touch with us at KAASS LAW, 815 E Colorado St #220, Glendale, CA 91205, (310) 943-1171 at any time!