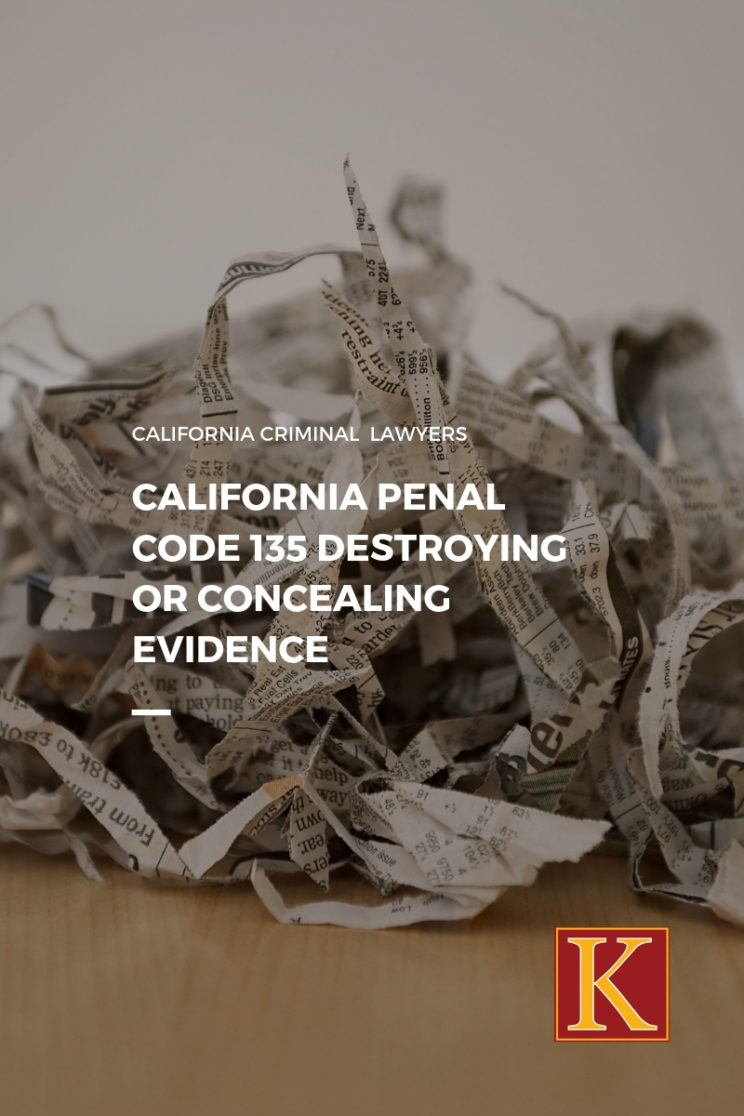 California Penal Code 135 makes it is illegal to willfully and knowingly destroy or conceal any form of evidence that is to be used in a trial or government investigation.

Does Destroying Evidence Apply to Civil and Criminal Cases?

Destroying evidence is prohibited in both civil and criminal cases, including contract dispute litigation or divorce. As noted above this charge applies to evidence which is used in trial or government investigation.

What Must Be Proved To Be Convicted of California Penal Code 135 PC?

In order for a defendant to be convicted of Penal Code 135 PC destroying or concealing evidence the prosecutor must be able to prove the following elements:

You Can’t Be Convicted Under Penal Code 135 PC If:

In case the defendant destroyed the evidence when no legal investigation or trial was in process, and later it turned out that the destroyed thing could be used as an evidence in an investigation process that began later he can’t be convicted under Penal Code 135 PC.

Can Defendant Be Convicted For Penal Code 135 PC If There Was only an Attempt to Destroy or Conceal?

There are several common legal defenses for CA Penal Code 135 which including some of the following:

In case defendant wasn’t aware that there was an active criminal investigation when he destroyed or concealed the item of the question, he cannot be convicted of this crime.

In case the evidence was destroyed or concealed accidently and the defendant didn’t act consciously he should not be convicted of this crime.

In case the evidence survived destruction or it was possible to restore it, then the defendant cannot be convicted of concealing or destroying evidence.

Penalties for Penal Code 135 destroying or concealing evidence is a misdemeanor in California Law. The penalties are the following:

The penalties can be leveled in conjunction with penalties for any other crime defendant is accused of. Additionally defendant usually faces to other penalties, such as a 3 year probation period, community service, restitution, civil lawsuits, negative professional licensing consequences, immigration consequences and more.

Hire the most dedicated Glendale criminal defense lawyer who has experience with Penal Code 135 PC cases. You can rely on our experienced California Penal Code 135 PC defense Lawyer to carefully analyze the facts of your case to prove the facts necessary. We back all of our clients and we invite you to give us a toll free call at (310) 943-1171 to speak to our experienced attorney today. Get in touch with us at KAASS LAW, 815 E Colorado St #220, Glendale, CA 91205, (310) 943-1171.