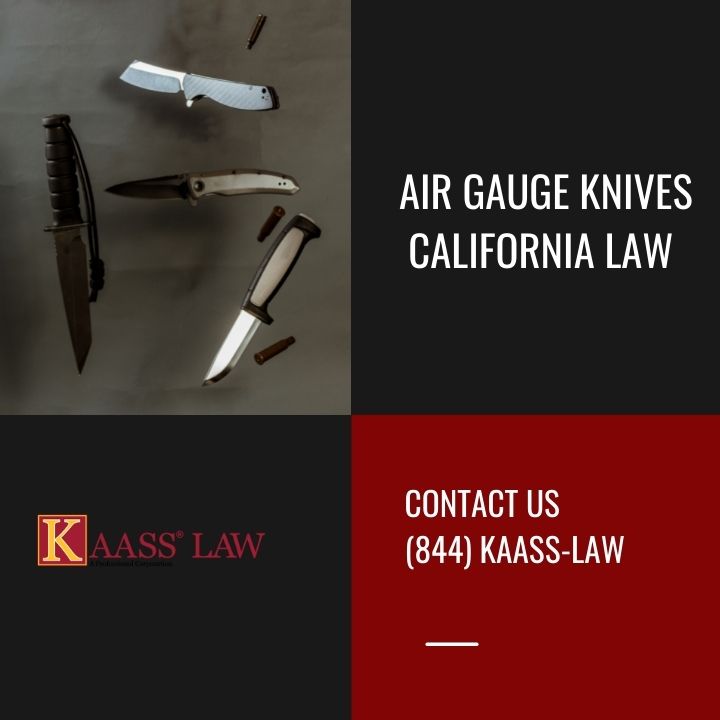 Despite organizations’ ongoing attempts to increase rights to own and carry various types of knives in the United States. There is still a long list of knives that are illegal, including “air gauge knives,” which are uncommon in California.

But first, let’s define an air gauge knife and the actions that are illegal under California law.

What is an Air Gauge Knife?

In other words, characteristics of this type of knife are:

Possessing, selling, or engaging in other actions with air gauge knives, which will be discussed further in this article, is illegal under California Penal Code section 20310. Section 16590, which prohibits the manufacture, sale, and/or possession of certain dangerous weapons, applies to air gauge knives. This section among prohibited firearms, firearm equipment, martial art weapons, and other prohibited weapons also lists prohibited knives, such as ballistic knives, lipstick case knives, and air gauge knives.

Under section 16590, one can be liable for knowingly committing the manufacture, import, sales of listed general weapons.

What Actions are Illegal Under California Penal Code, Section 20310 PC?

In California, PC 20310 is an example of a wobbler. Wobblers are unique in that they can be classified as either misdemeanors or felonies, depending on the prosecutor’s decision. Typically, a wobbler’s criminal history and the facts of the current case determine how the case will end.

A knife with an air gauge is one that:

What Are the Penalties for Violations of Section 20310 California Penal Code?

The violation is in the category of wobble offense, thus it can be both as a felony or a misdemeanor, depending on the factual circumstances of the case. Charges for such violations are imprisonment in a county jail or a significant amount of penalty.

If charged as a misdemeanor, the following penalties shall be imposed:

In case the crime is charged as a felony, it shall be punished by:

What Legal Defenses Are Available to Help you Avoid Punishment?

A defendant can use the necessity defense to avoid being found guilty if he can show that he had a compelling reason for committing the crime. An accused could argue that he committed a crime because he had no other option in the case of an illegal act with an air gauge knife.

Examples of such defenses can be:

Section 16140 of the Penal Code of California gives a certain definition for the air gauge knife. As, in case the instrument you sold, imported, possessed, or gave does not correspond to the provided definition, you cannot be charged under section 20310 of the California Penal Code.

There are certain categories of people, who are free from prosecution from the relevant section of the Penal Code of California. These are members of law enforcement agencies. Thus, if you can prove that you are such a person, you will be in this category.

If you or your friend are accused of violation of Penal Code 20310 PC of California, we invite you to contact criminal attorneys of the KAASS Law firm for consultation and further assistance. Please feel free to give our office a call at 310.943.1171.