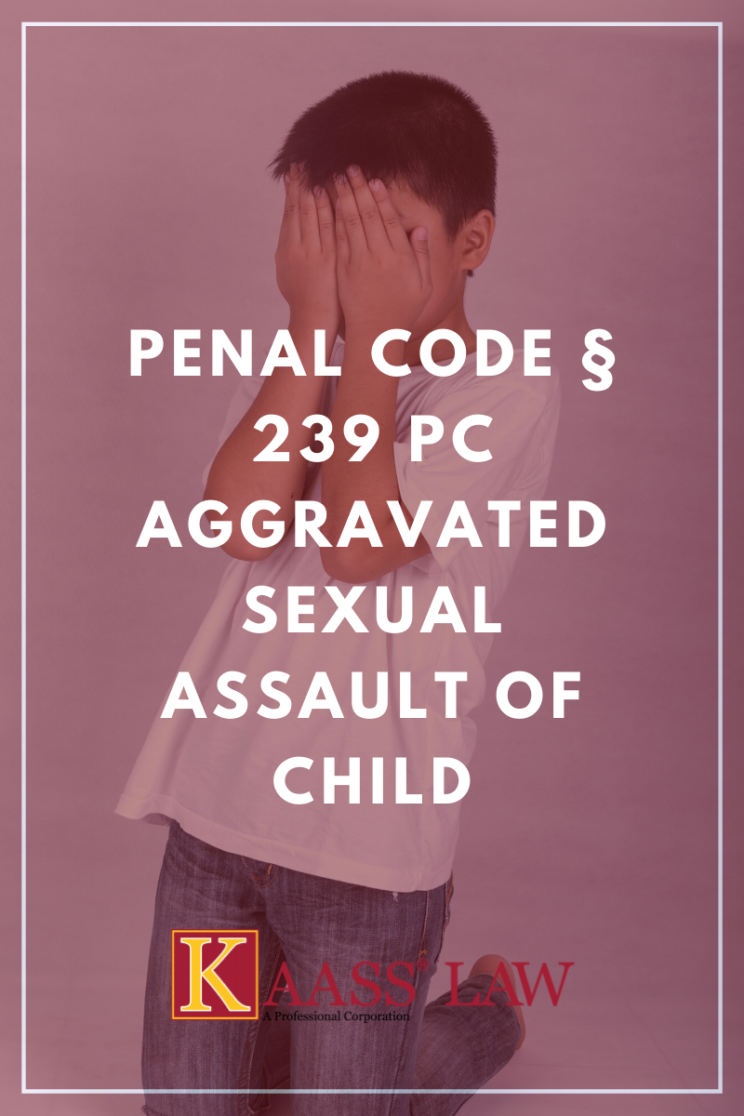 Protection of minor’s rights has always been one of the most important goals in any democratic society. Besides insurance of minor’s rights, it has also been essential to criminalize and punish perpetrators of sexual abuse. Penal Code defines various types of sexual abuse of minors and one of them is aggravated sexual assault of a child under Penal Code section 239 PC.

What is Considered an Aggravated Sexual Assault of a Child?

The crime is defined as the commitment of “a certain offense” to a child. Note that special elements shall be met to criminalize the action as an aggravated sexual assault of a child.

First is the age of the minor- the latter shall be under the age of 14. It means that children in the age of 14 or above cannot be considered victims under this section.

The second element is the age difference between the perpetrator and the victim. Under Penal Code section 239 the victim shall be seven or more years younger than the perpetrator. Again, in case this element is not present, the action will not be criminalized as aggravated sexual assault of a child.

The third is the commitment of “the certain offense”. Not any sexual abuse of a minor under the age of 14 and with 7 or more years of age difference with the perpetrator shall fall under section 239. The listed crimes are rape, sodomy, oral copulation, and sexual penetration.

Thus, in case one assaulted a child under Penal Code section 240 which is not in the list of “the certain offenses”, it will be considered that the third element of the crime is absent.

What are the Penalties for a Penal Code 239 PC Conviction?

Aggravated sexual assault of a child is punished as a felony and by imprisonment in California state prison for a minimum of 15 years to life imprisonment. The criminal can also face consecutive prison terms, which means that the latter can face sentences under section 239 back to back.

Another negative consequence of a Penal Code 239 PC conviction is being required to register as a sex offender.

Negative Consequence of Being Required to Registrar as Sex Offender

Besides the negative reaction of the society and public contempt and hatred, registration as a sex offender interferes with several rights of a person such as the right of freedom of movement, right to privacy, right to work, and several other protected rights by the Constitution.

The sex offender can also face difficulties in employment. After conviction, there can be limitations to work in certain places which are near schools or kindergartens.

Thus, besides long imprisonment, registration as a sex offender and remaining as it unless the court determines otherwise, can limit and restrict many of the rights of the offender and leave negative consequences in his life after conviction.

If you or a loved one has been charged with Aggravated sexual assault of a child or other related crime, we invite you to contact our Aggravated Sexual Assault of Child Defense Attorney today at (310) 943-1171 for a free constellation and case review.