Penal Code 647(a) Lewd or Dissolute Conduct in Public 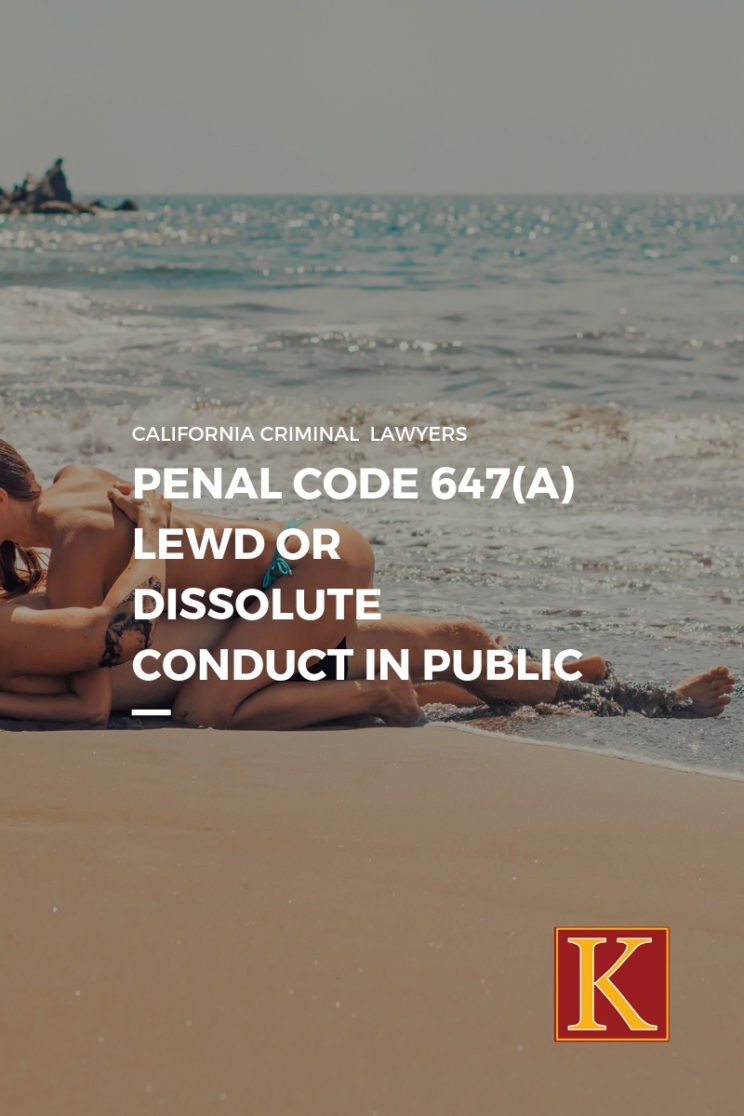 According California Penal Code Section 647(a) it is prohibited to engage or solicit another person to engage in lewd or dissolute conduct in any public place or in a place open to the public or exposed to the public view.

What Needs to Be Proved to be Found Guilty of Penal Code Section 647(a)?

To prove that the defendant is guilty of engaging in lewd conduct, a prosecutor must prove following elements:

Is it illegal to Engage in Sexual Activity in Public in California?

In California it is not illegal to engage in a sexual activity in public. It’s only considered unlawful in case person knew or reasonably should have known of the presence of another one who was likely to be offended.

What is Considered as “Public” in Lewd Conduct Penal Code 647(a) Cases?

The term “public” is broadly interpreted in lewd conduct cases. It can be a place open to the public such as a vehicle parked by the road, a hallway in an apartment building, shopping malls, adult book stores, public bathrooms. Locations like home, hotel room, place of business are not considered public places. But there can still be a violation of Penal Code 647(a) in case a person can be seen through an open window or door with no blinds or curtains.

What are Legal Defenses to California Penal Code 647(a)?

Defendant didn’t do anything lewd or dissolute

In case the defendant did not touch himself or another person in a way that can be considered as lewd or dissolute act then he is not considered guilty. The prosecutor has the burden of prove that the defendant was engaged in lewd conduct.

Defendant had a reasonable belief that no one was present

This crime requires that person intentionally expose himself in a public place where other people were in plain view or in an area where people usually gather. Unless defendant knew that someone would likely see him and be offended, he won’t be considered guilty Under Penal Code 647(a).

Conduct Was Not In A Public Place

In case the sexual activity took place on private property or an area where the public is not invited then it is not considered a lewd conduct.

Under California PC Section 647(a) engaging in or soliciting another to engage in lewd conduct is a misdemeanor offense, and the penalties are the following:

However, judges usually place first time offenders on probation with little or no jail time. A misdemeanor conviction carries an informal or summary probation for three years. A conviction for lewd conduct in public does not require defendant to register as a sex offender.

For answers to any other questions you may still have about California Penal Code 647(a) or to discuss your case confidentially with our team of experienced California criminal defense attorneys, give us a call at (310) 943-1171. Our lawyers in Glendale, Los Angeles County, CA, are highly dedicated to serving the needs of our clients.