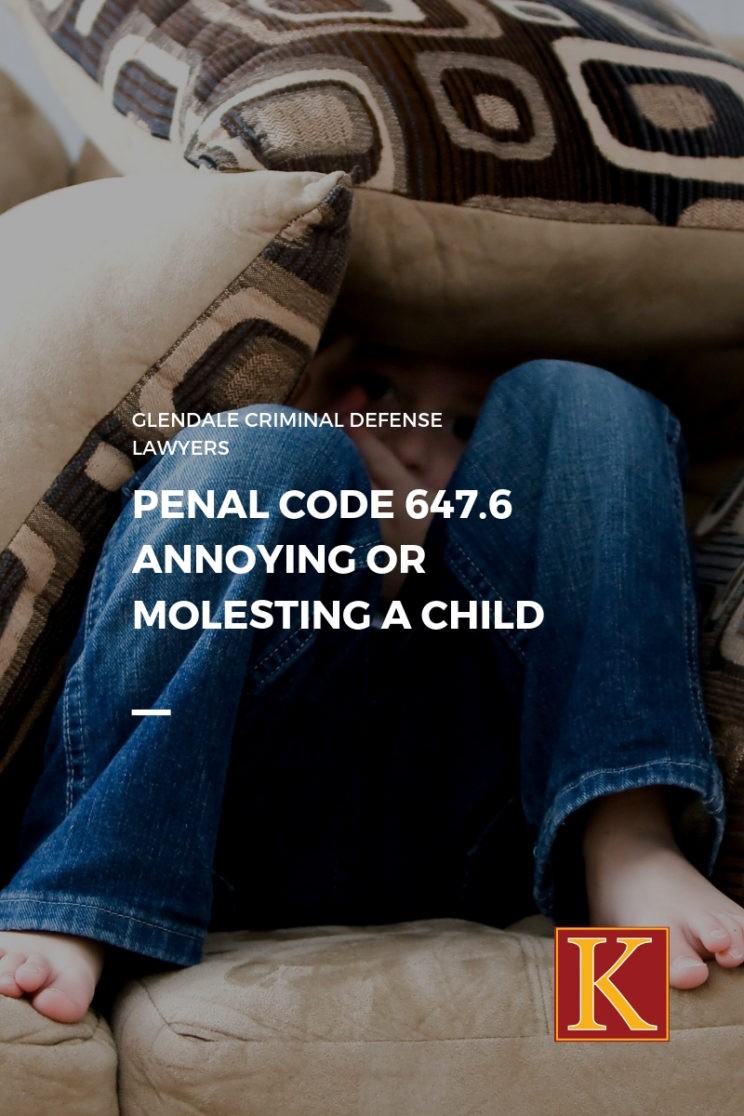 According to California Penal Code 647.6 it is unlawful to molest or annoy a minor under the age of 18 while motivated by an abnormal or unnatural sexual interest in the minor.

What Elements Must Prosecutor Establish to Convict a Defendant of Penal Code 647.6

The prosecutor must establish the following elements for convicting a defendant of Penal Code 647.6 annoying or molesting a child

Conduct Considered as “Annoying or Molesting a Minor”

Under the Penal Code Section 647.6, the words “molest” and “annoy” refer to the same behavior and actions.

Penal Code 647.6 is Classified as a General Intent Crime

California Penal Code Section 647.6 classifies annoying a child as a “general intent” crime, so the prosecutor does not need to prove that defendant intended to be sexually inappropriate in his behavior. If defendant’s behavior could irritate or disturb another person he can be convicted of committing this crime. Furthermore the child does not actually need to be irritated or disturbed by the defendant’s conduct. According to PC annoying a child charges are examined by what so called “objective test”, when the court only looks at the nature of the behavior itself, but not the result of the behavior.

Difference Between PC 647.6 and Other California Sex Crimes

According to California Penal Code 647.6 PC it is not necessary that the defendant touch the child’s body. The difference between other sex crimes is that crime of annoying a child can be just by using words that could be construed as annoying.

To convict defendant under California Penal Code 647.6 PC prosecutor must prove that he didn’t only have committed an inappropriate act towards a minor, but also the act was driven by a sexual interest in a child. So in case the defendant’s behavior was driven by other than sexual interest, then he did not commit an annoying a child crime.

In situations where the defendant has no aggravating factors, the first offense under PC Section 647.6 PC is a misdemeanor with the following penalties:

California Penal Code Section 647.6 becomes a wobbler in case defendant annoyed a minor after entering inhabited dwelling house, inhabited part of a structure or a trailer coach without consent. If convicted as a misdemeanor under Penal Code 647.6(b), defendant will face the same above mentioned punishment.

If convicted as a felony the punishment will be 16 months, 2 or 3 years in California state prison. If the defendant has prior Child Molestation Conviction under Penal Code 647.6, the conviction will be charged as a felony. Defendant will receive up to three years in California state prison for a second or subsequent conviction for annoying or molesting a child.

In case the defendant has prior felony conviction for certain specified sex offense then violation of  Penal Code 647.6 will be charged as a felony, punishable by two, four, or six years in state prison. The list of such offenses includes, but is not limited to:

If the judge believes that the defendant doesn’t present any danger to children, the punishment can be probation instead of jail or prison time. There are two types of probations the defendant might receive, depending on whether he was convicted of a felony or misdemeanor.

Misdemeanor or informal probation can last from 1 to 5 years, with the requirement to pay fines and do some community service/labor. Additionally, defendant will be required to appear before the judge at specified times.

Felony or formal probation can last from 3 to 5 years, with the requirement to regularly meet with a probation officer, pay restitution to the victim and comply with other conditions. Additionally, the judge can sentence the defendant to 1 year in a county jail. In case the defendant violates the conditions and terms and of formal probation, the judge can place him in a state prison.

Registration as a sex offender

Defendant will be required to register as a sex offender for violating Penal Code 647.6 PC. The information about him and his offence will be available for the public to see on the Department of Justice’s Meghan’s Law website.