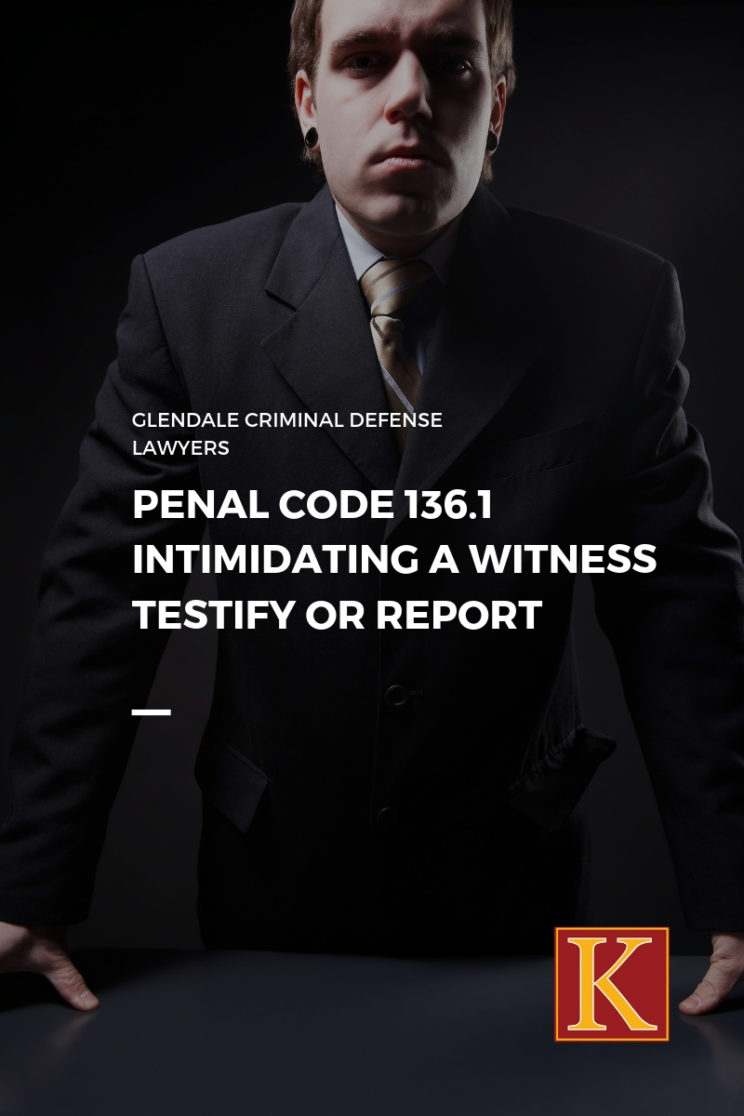 According to California Penal Code 136.1 it is illegal to prevent or to attempt to prevent any witnesses or victims of a crime from testifying or reporting or about the crime.

What Must the Prosecutor Establish in Penal Code 136.1 Charges?

Prosecutor must establish the following elements for proving an allegation of intimidating a witness or victim under Penal Code 136.1:

Defendant acts maliciously when he illegally intends to harm, annoy or injure another person in any way, or intends to interfere in any way with the orderly administration of justice. In regards to PC Section 136.1 prosecutor must prove that defendant acted with the intention of dissuading a witness or victim from reporting or testifying or a crime. In case the victim or witness is a family member and defendant dissuaded them for their own protection, then PC Section 136.1 PC stipulates that the court must assume that defendant didn’t act maliciously.

Preventing or Dissuading Witness from Testifying or Reporting Crime in California

It is not important whether defendant was successful in his attempt to prevent, dissuade or intimidate a victim or witness. Even if the defendant’s attempt was unsuccessful he still violated California Penal Code Section 136.1 PC.

In case the defendant used or threatened to use force against the victim or witness, he will be considered guilty. It doesn’t matter whether someone actually suffered or not, the crime is concerned with the defendant’s acts and not with the result of those acts. If the force was actually used that will be an aggravating factor with additional three to six-year state prison sentence.

“Witness” is a person who is aware about the facts of a crime, whose declaration under oath may be considered as evidence, who has reported a crime, or has been served with a subpoena.

Penalties for a Penal Code 136.1 Conviction?

Penalties for violating California Penal Code 136.1 can be charged as a misdemeanor or a felony and are as follows.

Penalties for misdemeanor Penal Code 136.1 conviction are the following:

Penalties for felonyPenal Code 136.1 conviction are the following:

Sentencing Enhancement for Personal Use of a Firearm

In case the defendant used or was armed with a gun while attempting to dissuade a witness or victim he will receive additional one to ten-year state prison sentence.

In case defendant is convicted of violating Penal Code Section 136.1″for the benefit of, at the direction of, or in association with any criminal street gang” California’s gang enhancement automatically imposes an additional and consecutive seven-year-to-life prison sentence.

If you are a loved one has been charged with violating Penal Code 136.1 contact our Glendale criminal defense lawyer today at (310) 943-1171 for a free consultation.