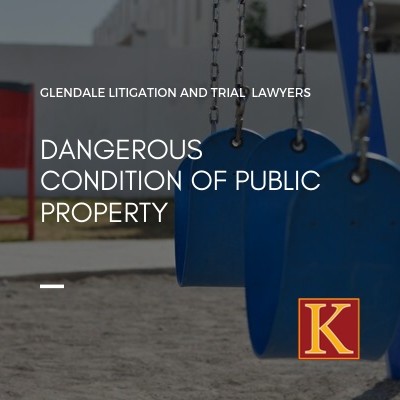 According to California Government Code Section 830(a) a dangerous condition of property is a condition which creates a substantial risk of injury when such property is used with due care in a way in which it is foreseeable that it will be used.

In California, property managers and owners are obliged to establish engineering standards when designing buildings and roadways and buildings. They should also conduct regular inspections for assuring that the property is not dangerous and maintain the property in a safe and secure manner. When the manager or owner fails to fulfill his legal obligations and someone is injured, he is responsible for the caused injuries and financial damages.

According to CACI Instructions 1100 and California Government Code Section 835 the plaintiff must be able to prove the following elements to establish the claim.

In some cases, it is easy to determine who is the owner of the property. For example, if a person is injured in a dangerous curve in a roadway it is easy to know that it involves a public entity. The victim must determine whether the roadway is the responsibility of the Country, the State or the City.

Other cases can involve a piece of business or a land that seems to be private, but is actually operated by a government entity. Sometimes there are no signs letting us know who is the owner of the property. In response to a letter to the entity requesting ownership information a public entity typically confirms the ownership or directs to the potential owner.

The Process of Suing a Government Entity

It is important to know that government entities have a multitude of defenses and immunities for fighting the claims.