Civil Liability for Assault in California 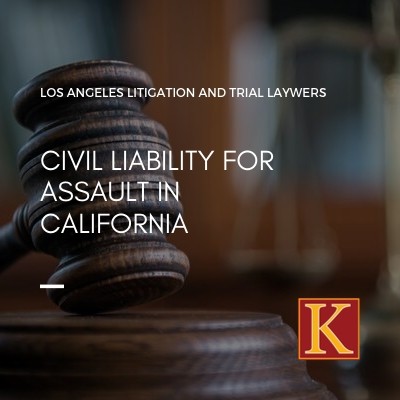 Under personal injury law, assault is defined as a purposeful act by one person which causes a reasonable apprehension of immediate harm or offensive contact to another person. Assault is known as an intentional tort when it is made the subject of a civil case.

According to CACI 1301 to establish the claim of assault, a plaintiff must prove all the following elements:

Assault does not always involve physical contact, at least not when it comes to civil liability. Even fear of offensive or harmful touching is usually enough for an assault to have occurred. In case the touching actually occurs, the physical contact is usually classified as a battery in civil law, though both claims are often made together.

Difference Between Criminal Assault and Civil Assault in California

Assault can be filed under civil and criminal laws and in both cases the elements to prove are similar. Both require that the defendant’s conduct create a reasonable apprehension of harm to the plaintiff. Though, the difference between criminal assault and civil assault lies mainly in the legal remedies that result from the action.

In a civil assault claim, it is a private lawsuit between two persons, where a plaintiff can normally collect monetary damages, but a jail sentence is not usually imposed in civil assault claims. In contrast, with a criminal trial, the involved parties are the state (the prosecution) and the victim. Any damages awards can be limited by state statutes that cover how much a victim can recover in a criminal trial. On the other hand, criminal laws generally impose a jail sentence for the defendant, which can range from a few months to several years depending on the severity of the assault.

In case the defendant was acting in self-defense or defense of another person he can’t be found liable.

In some cases, the defendant could have a limited right to commit assault. For instance, when a peace officer attempts to place a suspect under arrest.

In a successful claim, the plaintiff must prove all the elements of assault: the apprehension of harm, cause of action and the defendant’s purpose or knowledge of harm to the plaintiff.

Damages that can be recovered