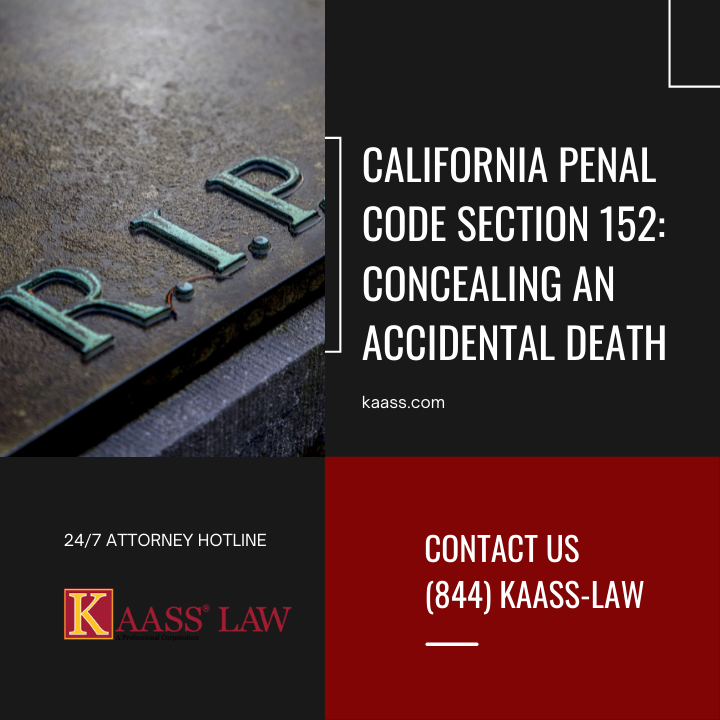 California Penal Code Section 152 states, “every person who, having knowledge of an accidental death, actively conceals or attempts to conceal that death, shall be guilty of a misdemeanor.”

What Constitutes the Crime of Concealing an Accidental Death?

There are 2 basic requirements that form the crime of concealing an accidental death. They are:

The first element of the crime makes it necessary that the accused person had knowledge of the accidental death. It also is the part that specifies that the death itself must be “accidental,” meaning that the actual occurrence that led to someone dying must have been unforeseen.

The second element requires that you concealed or tried to conceal the death. One can fulfill this criminal definition by doing any of the following:

Concealing or destroying the body of the person who died would be a clear example of this offense, but there are several other ways to criminally conceal an accidental death in the eyes of the law. Hiding any piece of evidence or misleading authorities in any way would also be considered a violation of PC 152.

What are the punishments for violating PC 152?

Concealing an accidental death is a misdemeanor offense in California. It is punishable by:

How Can I Defend Myself if I Am Falsely Accused of Concealing an Accidental Death?

There are several ways to defend yourself if you are wrongfully charged with violating PC 152. They include:

There are circumstances in which one may hide evidence or lie to the police without actually making an attempt to conceal any death. Doing this could result in being charged with another crime, such as PC 135 (destroying or concealing evidence). However, if you didn’t actually try to hide the fact that someone died, you couldn’t be charged.

Accidental deaths often create situations where people feel scared or threatened by others who know about the death. It may be the case that you want to tell authorities what happened, but others do not. If anyone who witnessed the death made a threat to you in order to keep you quiet, this is known as “duress,” and you would not be guilty of concealing an accidental death because you only did it because you feared for your own safety.