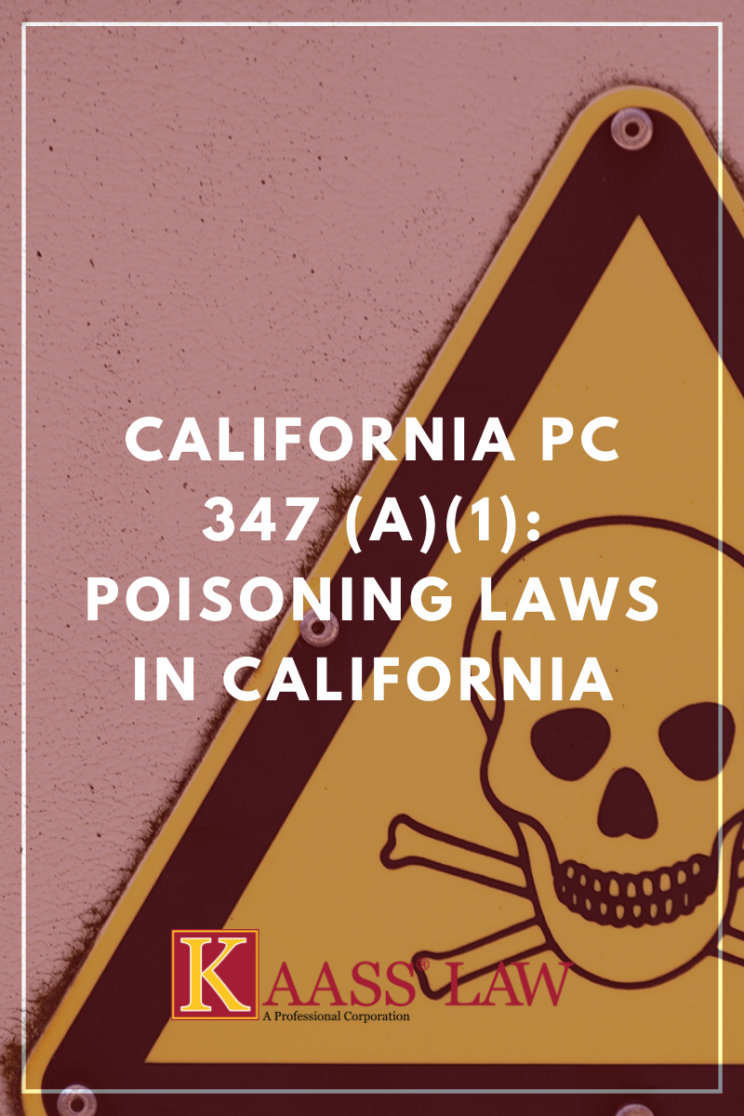 California Penal Code section 347 (a)(1) states, “Every person who willfully mingles any poison or harmful substance with any food, drink, medicine, or pharmaceutical product or who willfully places any poison or harmful substance in any spring, well, reservoir, or public water supply, where the person knows or should have known that the same would be taken by any human being to his or her injury, is guilty of a felony punishable by imprisonment in the state prison for two, four, or five years.”

What Constitutes the Crime of Poisoning in California?

There are 2 elements that make up the crime of poisoning in California. They require that the defendant:

The law applies to both large-scale public goods, such as a water supply, and meals and medications consumed by individual people. It is required that one acted purposefully when poisoning a substance, meaning that accidental contamination would not count.

It is also necessary that the defendant knew that what was poisoned would be consumed by someone. It does not mean that someone had to have consumed it for there to be a crime, as long as it was meant for human consumption, this would be sufficient. Moreover, even if one doesn’t certainly know that the poisoned item was meant for consumption, as long as the defendant reasonably should have known that it would be consumed, then this will constitute a violation of PC 347 (a)(1).

EX: A frustrated employee decides to take some rat poison and stick it in a pill bottle that he found in his boss’s desk. The boss consumes the rat poison and becomes very ill, but the employee claims that he should not be guilty of violating PC 347 (a)(1) because he had never seen his boss take the medication before. While he may not have seen anyone take the pills before, it is reasonable to assume that a pill bottle in someone’s desk is meant for consumption.

What Are the Punishments for Poisoning?

Poisoning is a severe crime that is considered a felony offense in California. It is punishable by up to 5 years in a state prison. It is also important to note that if your poisoning causes great bodily injury or death to another, then your sentence can be extended by 3 additional years, and you will most likely be charged with other crimes.

How Can I Defend Myself if I Am Accused of Poisoning?

There are a number of legitimate defenses that you can utilize if you are wrongfully charged with poisoning in the state of California. Some of them are:

You could defend yourself if you did not know that the item you poisoned would be consumed by humans, and it was unreasonable for someone to know that it was for human consumption.

Also, it is required that you poisoned the item willfully. This means that you knew that the substance would be harmful to others and that you purposefully mixed it with an item for human consumption.

EX: A mother makes cookies for her son and friends who are visiting, and the cookies include nuts, which one of her son’s friends is allergic to. The friend has an allergic reaction and the mother is charged with a violation of PC 347 (a)(1). She would be guilty if she knew the friend was allergic and purposefully included the nuts, but she would be innocent if she had no knowledge of his allergy.

Lastly, it is required that the substance you introduced was actually poisonous or harmful. This is a legal grey area, but there are instances in which people may be charged for poisoning when the substance that is considered “poison” is not actually harmful.