Are Drunk Drivers Always At Fault in a Motor Vehicle Accident? 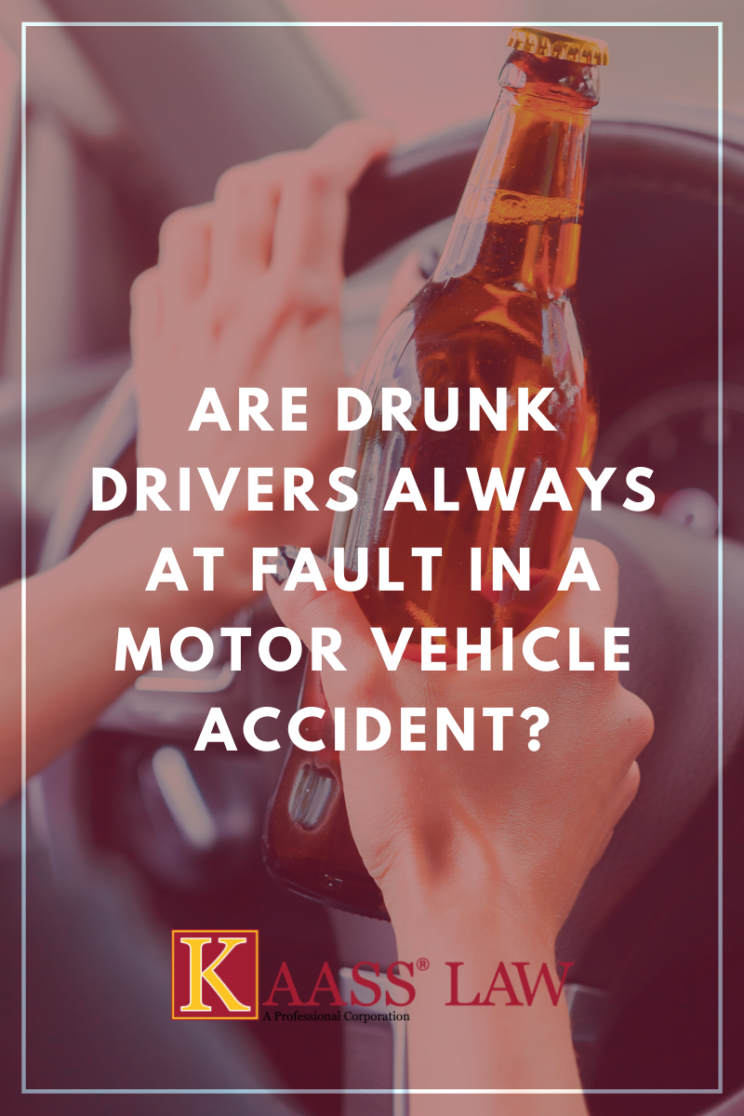 When you are in an accident with a drunk driver, it seems obvious that the driver should be responsible for your losses. However, drunk drivers are not always automatically completely liable in a motor vehicle accident in California. In some cases, accidents involving a drunk driver may not have been caused by the drunk driver themselves.

How is Liability Determined in an Auto Accident?

To hold a driver responsible for an accident, he or she must have been driving in an unlawful or negligent manner which directly caused the accident. This includes any number of traffic safety rule violations such as:

Liability is determined by examining the facts of the accident and identifying what the direct cause was, and doing so can be quite complex. Consult with one of our Los Angeles Personal Injury attorneys to help you figure out who was at fault in your accident.

How Can I be at Fault for an Auto Accident if the Other Driver was Drunk?

When the drunk driver’s impairment is the cause of the crash, they are completely liable for the accident. However, it can also be the case that the driver was drunk but was driving in accordance with traffic laws, and it was the other driver’s actions that caused the crash.

For example, you may have failed to brake in time and hit a drunk driver’s car from behind. In that case, you are liable for the accident. The other driver will get charged with a DUI if the police arrive, but that will not change your fault in the accident because the driver’s drunken impairment was not the cause of the crash.

If it was your wrong action that ultimately caused the accident, you are at fault, regardless of the other driver’s impairment. If their drunken impairment did not cause the accident, it will most likely not be a factor in deciding liability.

What if I am Partly at Fault in an Accident with a Drunk Driver?

California has what is called comparative negligence, which allows fault to be shared between both parties. In such cases, the settlement amount that is recovered to cover losses is much less.

For example, you may have been looking at your phone while you were driving and a drunk driver swerved out of their lane and side swiped your car. In such a case, both parties will most likely share fault because both parties’ actions contributed to the accident. Had you not been on your phone and the driver had not been impaired and swerved, the accident would have been avoided.

If you are partly at fault in your accident, our Los Angeles Personal Injury attorneys can help you figure out what percentage of the accident was your fault. You can still recover losses, but they will be reduced by the same percentage that you were at fault for. So if you were 90% at fault, you can still receive 10% of your damages as compensation.

What Should I do if I was Involved in an Accident with a Drunk Driver?

If you or a loved one has been in an accident involving a drunk driver, contact our Los Angeles Personal Injury attorneys at (310) 943-1171 for a free consultation. Our attorneys will evaluate the details of your case and let you know what to expect and how you can proceed. Our team speaks English, Spanish, Russian, and Armenian.