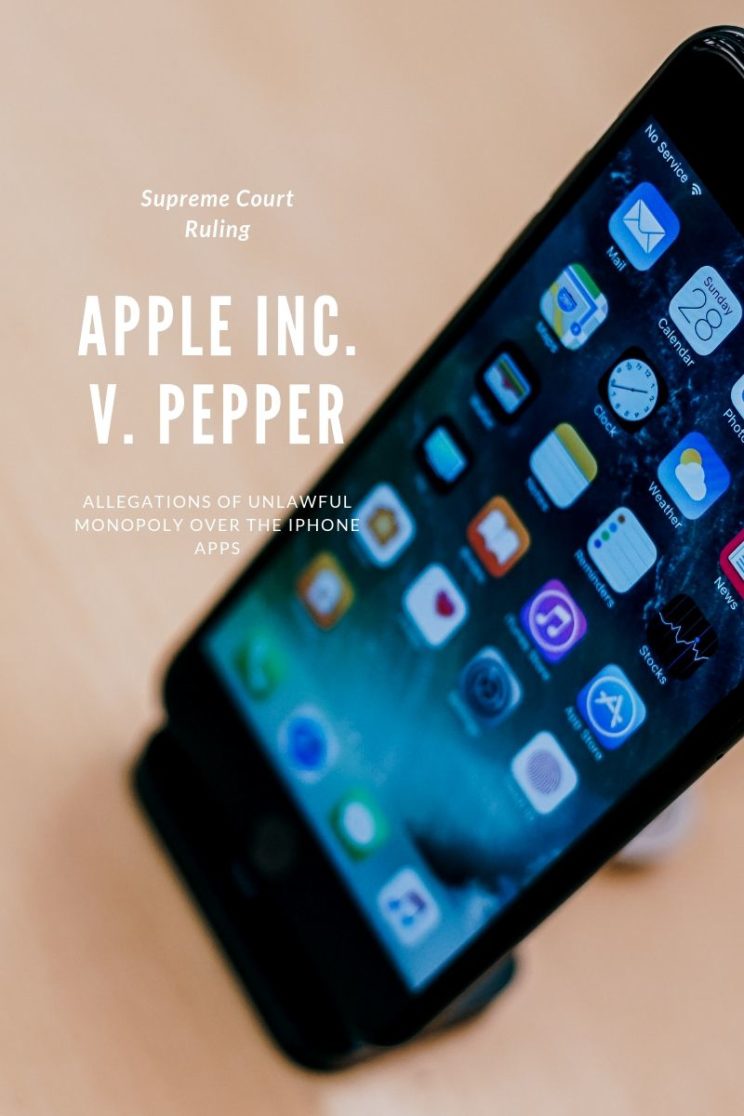 Their argument was based on that even though Apple didn’t create the majority of the apps on the App Store, the company approves and distributes all available apps on the Store. Apple charges the developers a $99 yearly membership fee, lets them to set the retail price for the applications, and then charges a 30% commission on all app sales.

The plaintiffs claimed that the fee was being unlawfully passed on to them. They sought damages against Apple for its unlawful commission fee that are available under the Clayton Act, but Apple argued that plaintiffs were not entitled to file the suit. Application developers are responsible for setting the price for the app and collect the money from the purchase. U.S. Supreme Court precedent (Illinois Brick Co. v. Illinois (1977)) prohibits indirect consumers from bringing Clayton Act violations from suppliers.

The Company argued that the consumers are not buying the apps directly from Apple but from the developers. Therefore, Apple asked the Supreme Court to apply Illinois Brick Co. v. Illinois in this case and to bar the plaintiff’s case.

What was the Issue in The Pepper Case?

Whether consumers can sue for antitrust damages anyone who delivers goods to them, even where they seek damages based on prices set by third parties who would be the immediate victims of the alleged offense.

According to Section 4 of the Clayton Act, 15 U.S.C. § 15(a), antitrust damages are only available in cases of overcharging to the first party who suffers the overcharge and not extended to pass through parties from the first purchaser.

The Supreme Court in Illinois Brick Co. v. Illinois, established the rule that indirect purchasers of are not able to recover antitrust damages from violators.

Application of the Doctrine to The Pepper Case

Apple’s argued that the consumers are purchasing the apps from the developers, and it is uncertain whether Apple’s commission charge affects the consumers.

The district court dismissed the case, ruling that iPhone users are purchasing the apps directly from developers, not Apple, and consequently was not eligible to sue for antitrust violations according to precedent from a 1977 U.S. Supreme Court ruling.

The United States Court of Appeals for the 9th Circuit Ruling on Apple Inc. v. Pepper

The Ninth Circuit Court reversed the dismissal, ruling that App Store consumers are buying directly from Apple and not from the app developers.

In a 5-4 opinion the Supreme Court ruled that the Illinois Brick doctrine looks to whether the consumers are direct purchasers from the party sued for anticompetitive behavior. In this case, the consumers purchased on the App Store directly from Apple. It doesn’t matter who set the price. The case is valid against Apple.