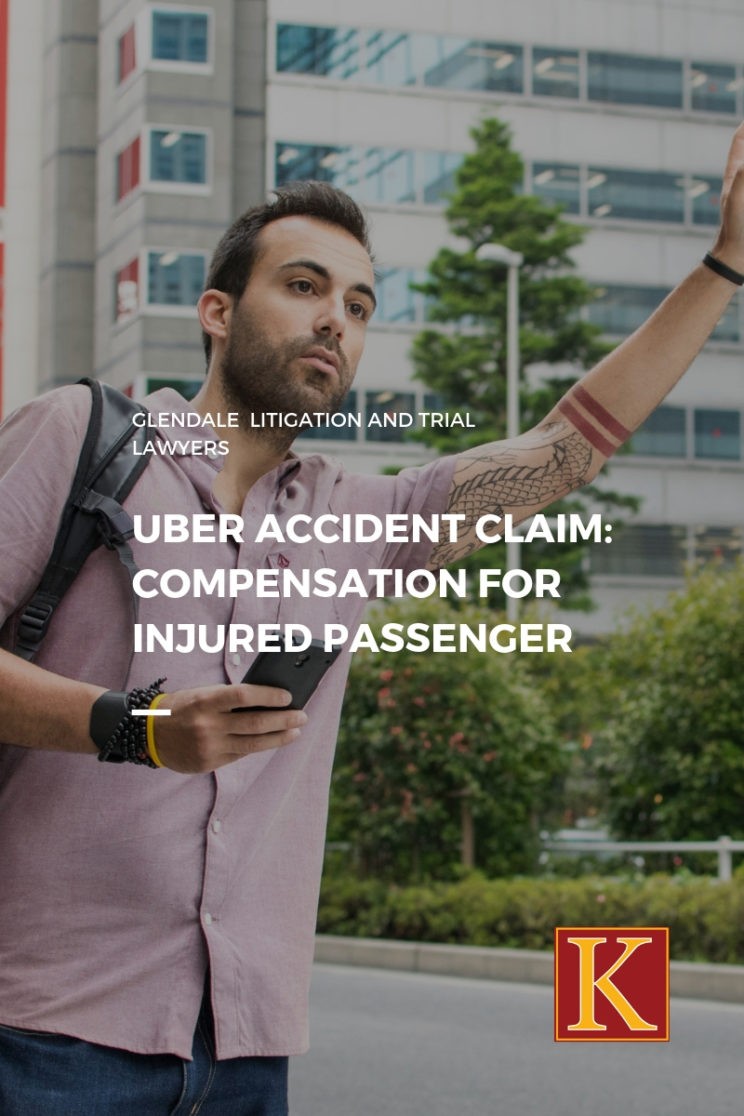 Uber is typically considered a technology company which provides a service of connecting people who want a ride with people who want to drive them around. Using an app is often convenient, quick and cheaper than using a taxi.

Are Uber Drivers Considered Employees or Contractors in California?

Thus, Uber drivers are not considered employees of the company, rather they are independent contractors.

This is problematic for passengers who are injured in an accident, since employers are generally liable for the actions of their employees. Although, it is to be noted that California Assembly Bill AB5 is hoping to provide protection to employees of gig app sharing economy companies such as Uber and Lyft.

If a passenger was hurt in an accident he must seek prompt medical attention.

Even if the passenger doesn’t have pain right away he can experience symptoms several days after the accident. Under California law, victims in car accidents have a right to recover compensation equal to the full value of caused damages. Passenger can recover for both monetary losses and intangible, noneconomic damages.

What Compensation Can an Injured Passenger Involved in an Uber Accident Claim?

A injured passenger involved in an Uber accident may be entitled to the following compensation:

Uber Driver’s Policy: A driver who drives for Uber is required to carry his own car insurance, which usually covers injuries of passengers in the result of the accident. Insurance requirement is imposed by California law and affects any person who has and operates a motor vehicle, regardless of whether he drives for companies like Lyft or Uber.

Though, it’s important to know that the driver’s insurer can deny the claim in case the driver was engaged in commercial activity at the time of the accident. The amount of money a passenger can recover is limited to the driver’s policy maximums. In California most drivers usually purchase minimum coverage, which may not be enough to cover the full extent of the injuries.

Third Party Policy: In case negligent third party is responsible for causing an accident, passenger can file a claim with that driver’s personal insurance company.

Uber Insurance Policy: Uber carries its own insurance policy in case the drivers are involved in an accident and insures its drivers with a $1 million policy.

The coverage which applies is based on the driver’s activity at the time the accident happened. Under this insurance policy, Uber is responsible for all damages up to the difference between the at-fault driver’s policy limit and Uber’s $1 million policy limit. Particularly in case an at-fault driver’s insurance policy covers $30,000 in damages, Uber is liable for a maximum of $970,000 if such a payout is required.

An Uber driver is carrying a passenger

This is the case when the $1 million policy can kick in. In case the Uber driver is carrying a passenger, the driver and passenger are covered under the liability insurance policy.

Actually Uber’s insurance policy is dedicated to helping avoid paying out as many claims as possible.

It is common for accident claims to be denied by Uber’s carrier. Аs mentioned above drivers are not considered Uber employees and this makes it more difficult for passengers to get compensation in case the driver was driving recklessly or was drunk and distracted. Victims can respond to a denial by suing Uber directly or can seek payment from the driver’s personal insurance company. Suing the driver directly can limit the amount of damages that can be received.

Are you in need of assistance with resolving your case? A Los Angeles uber accident lawyer from KAASS LAW can provide you with all the legal help you require! Don’t hesitate to let a trained professional help you out!